You are here: Home / keto diet 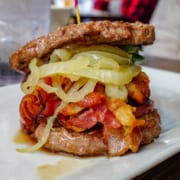 All diets are fads. Short-term means to an end rather than a healthy way of eating. Nevertheless, some diets are repeatedly resurrected and repackaged. Such is the case with the low-carb high-fat diet, of which the most recent cult craze is the ketogenic diet—keto for short.

What is the keto diet?

Originally developed to treat severe epilepsy in infants and children, the keto diet is a low-carb, high-fat diet that is largely adopted today to lose weight. Clinical keto diets limit carbs to 20 to 50 grams per day (primarily from nonstarchy vegetables). Protein is kept at a minimum to maintain muscle mass without disrupting ketosis—amino acids (glutamine and alanine) can be converted to glucose through a process called gluconeogenesis, which could move the body out of ketosis. [1],[2] But even this is controversial and scientists are still evaluating the long-term effects on muscle mass caused by the keto diet. The keto diet shares many similarities with the Atkins diet and other low-carb diets.

The keto diet simulates a fasted state and after three to five days of following a very low-carb diet your body is deprived of sugars and starches it was used to relying on for fuel. This causes a reduced secretion of insulin and forces the body to burn fat for fuel instead. The result is an overproduction of acetyl-CoA that places the body in a state called ketosis (or ketogenesis)—a state in which a type of acid called ketones (beta-hydroxybutyric acid and acetone) are the primary fuel for your body. Glucose (blood sugar) is the preferred fuel source for many cells in the body and when it is limited, the body uses fat as a fuel source.

Brain function is strongly linked to glucose levels and how efficiently the brain uses it as a fuel source. However, in a state of ketosis, the glucose-hungry brain uses ketones—that can cross the blood-brain barrier—for fuel. In the end, your body’s organs, tissues, and cells make dramatic adjustments to their new energy source. Benefits of the keto diet

As stated above, the keto diet was originally developed for children with hard to control seizure disorders. The diet helps control epilepsy through multiple mechanisms and biochemical alterations that reduce excess neuron excitability. [5] Doctors and scientists state that efficacy requires at least three months of a ketosis state. One major drawback to using keto for epilepsy is most people discontinue the diet because of its restrictions and diminished palatability.

Diabetes is characterized by metabolic changes such as high blood sugar and impaired insulin sensitivity. The keto diet promotes the release of excess fat, which can reduce the risk, or burden, of diabetes alone. Research also suggests that the keto diet may improve insulin sensitivity and reduce diabetic medication requirements. [5],[6]

Ketones, especially beta-hydroxybutyric acid, protect brain cells against damage caused by multiple types of assaults and emerging research suggests it may be beneficial for neurodegenerative disorders like Alzheimer’s disease and Parkinson’s disease. [7] Although the mechanisms of neuroprotection are not fully understood, these benefits may be due to improved brain cell signaling, restoration of neurotransmitter channel functions, improved cellular energy, and maintenance of cellular homeostasis. [8] The keto diet may also improve cognition and reduce age-related cognitive decline. [9] What are the risks and dangers?

Very low carb intake has been linked to premature death. [14] In fact, the researchers concluded that both low-carb and high-carb diets are associated with an increased risk of early mortality. The sweet spot seemed to be about 50%–55% carbohydrate intake that emphasizes plant-based foods—fat and protein from sources such as vegetables, nuts, whole-grains, and peanut butter—to promote longevity.

In order to force the liver to pump out ketones, the keto diet severely limits carbs, dramatically reducing the intake of the most nutritious foods—fruits and vegetables. These foods are a good source of dietary fiber, which maintains bowel health, helps control blood sugar, promotes a healthy weight, and lowers cholesterol levels. In addition, diets with insufficient fiber are associated with gastrointestinal disorders and colorectal cancer. [15],[16],[17] Constipation is a common adverse effect of the keto diet.

While neuroprotective benefits have been observed when adhering to the keto diet, high-fat diets also promote deterioration in memory, attention, processing speed, and mood, and increases brain inflammation. [18],[19] This suggests that high fat intake may negate or even reverse the cognitive benefits of ketones.

Increased risk of kidney stones is a well-known consequence of the keto diet, occurring in about 1 in 20 children. [20] To reduce this risk, individuals should ask their healthcare provider about supplementing with potassium citrate. The keto diet can also be dangerous for people with kidney disease. People with kidney disease often need to consume a low-protein diet, which may not align with the keto approach.

Reduced insulin levels caused by the keto diet cause your kidneys to release more electrolytes. [21] This can lead to dehydration and the “keto flu”—flu-like symptoms, constipation, cramps, irritability, and other symptoms lasting form a few days to weeks.

It goes without saying that if you reduce fruit and vegetable intake you are at a greater risk of nutrient deficiency. [22] These foods are loaded with vitamins, minerals, and other beneficial phytonutrients that maintain optimum function of your mind and body. Bonus: Naturally increase ketones without resorting to the keto diet

It is well-known that prolonged fasting and the keto diet raise ketone levels. But, what if there was a natural way to boost ketones without the risks of the keto diet? This may be possible by leveraging a compound found in mangos—mangiferin. Mangiferin stimulates the liver to produce ketones leading to significantly increased blood levels of ketones according to clinical research. [23] The study participants consumed 150 mg of mangiferin per day for 12 weeks, which increased beta-hydroxybutyrate by about 18% and acetoacetate by about 10%. Mangiferin supplementation also increased insulin sensitivity. This study suggests a safer way to increase ketones without resorting to a restrictive diet.

While weight loss and other benefits are possible with the keto diet, it is not a sustainable or long-term way to eat. The potential problems of the diet outweigh the benefits in the long-term. The keto diet is best reserved for people who have a specific medical condition for which it is indicated or who plan to use it for a short period to kick start weight loss (even this must be carefully considered). Ultimately, the high fat content—especially saturated fat, limited nutrient-rich fruits and vegetables, and health risks of the keto diet make it a concern for long-term health.