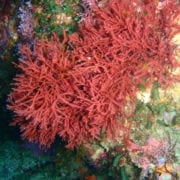 Currently, carrageenan is portrayed as significantly more harmful than the evidence supports and a small amount is not likely to harm you. Moreover, the minute amount of carrageenan in dietary supplements should not be of concern as the benefits of the other supplement ingredients far outweigh any diminutive risk of trace amounts of carrageenan in the capsules. However, a cautious approach is still warranted due to its potential effects on intestinal inflammation. Further research is necessary before carrageenan can be deemed completely harmless and safe. Sufficient evidence exists to say poligeenan has a greater potential to cause harm. The prudent approach would be to limit exposure to carrageenan (it’s very difficult to avoid it if you live in the United States due to its wide use) and avoid poligeenan where possible, particularly among those with a history of gastrointestinal issues (IBS, IBD, chronic diarrhea, etc.) or family history of colon cancer.