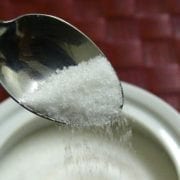 Xylitol is growing in popularity as a natural sugar substitute to sweeten various foods, gums, and oral care products. However, if you search the internet you find reports that xylitol is harmful and shouldn’t be consumed. So, what are the facts? Is xylitol a safe natural sweetener and sugar substitute with potential health benefits, or is it a toxic ingredient that should be avoided? Read on to discover the scientific facts of this often maligned sweetener.

This discussion needs to start with what xylitol is. Xylitol is a 5-carbon sugar alcohol (also called polyols) that has a crystalline, granular structure and sweetness comparable to sugar. Despite containing the name alcohol, xylitol contains no ethanol like alcoholic beverages. It is called a sugar alcohol — like other sugar alcohols: sorbitol, mannitol, maltitol, isomalt, and lactitol — because its chemical structure places it in the alcohol family. It contains about 2.4 calories per gram (compared to 4 calories per gram for sugar). It is naturally found in some fruits and vegetables. Commercial xylitol is usually obtained from corn cobs or birch trees. Sugar alcohols are not processed the same as sugar — absorbed and processed more slowly, which means that it provides fewer calories than the same amount of sugar and has less of an impact on blood sugar and insulin.

What is the problem or potential harm of xylitol and sugar alcohols?

Large amounts of sugar alcohols can cause gastrointestinal upset, such as gas, abdominal pain, and diarrhea.(1) However, the average person will not experience these effects unless they are consuming 50 grams or more per day. Indeed, research from the 1980s in the Soviet Union that administered 30 grams of xylitol per day observed that diarrhea and other side effects seldom occurred.(2) The same review of Soviet research concluded that xylitol is well-tolerated in children at doses of 20 to 35 grams daily for up to four weeks. People who are sensitive to sugar alcohols may experience GI symptoms — often severe — at much lower doses.

The most common report on blogs — even among health professionals — is a concern about the toxicity of xylitol. This concern largely stems from animal research and appears to be misguided (more to come on this). It is important to remember that natural doesn’t always mean non-toxic. What determines toxicity is the dose of the substance (this principle is true of all substances regardless of whether it is natural or synthetic). A perfect example is water. Drinking too much water causes water intoxication (poisoning, seizures, and convulsions). Water is necessary to sustain life, but it can be toxic in excess. The same goes for many natural products, including xylitol.

What does research say?

Here is a brief summary of some of the research regarding toxicity in animals and humans.

The current available research demonstrates that xylitol toxicity is species dependent, and not all animal studies can be directly correlated to humans. Current evidence in humans suggests it takes extreme amounts of xylitol to cause GI upset and potential harm.

Many products sweetened with xylitol (gum, breath mints, candy, protein powders) contain 1 gram or less of xylitol, meaning you would have to consume a significant amount of the products to even reach the safe level of 70 grams. Other products (jams/jellies — about 6 grams per tablespoon; baked goods) contain higher levels.

Research suggests that xylitol helps prevent tooth decay and cavities by preventing oral bacteria from sticking to teeth.(5) By preventing bacteria from sticking to teeth, xylitol reduces plaque formation. Remarkably, another review even found that xylitol can reverse the process of early cavities.(6) At least 5 grams of xylitol daily is necessary to produce a benefit to oral health, and some experts suggest 10 to 15 g in divided doses daily.(1) In addition, xylitol is a good choice for diabetics because it is low-glycemic and does not raise blood glucose or insulin levels like sugar.

Based on the research and benefits of xylitol, it can be safely used in most adults at reasonable amounts (no more than 50 grams daily, but preferably less than 35 grams daily) and most children (less than 25 grams daily). Larger amounts may cause GI upset, while even small amounts may be problematic for sensitive individuals. Xylitol is beneficial for oral health, diabetics, and as a natural sugar substitute in reasonable doses, but should be avoided in excessive amounts.

(1) Makinen KK. Gastrointestinal disturbances associated with the consumption of sugar alcohols with special consideration of xylitol: Scientific review and instructions for dentists and other health-care professionals. Int J Dent. 2016;2016:5697907.