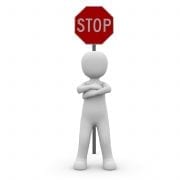 I have had this crazy ceramic pen/pencil holder since I was a child. It currently sits on the desk of my home office and serves as a reminder to remain objective and flexible. On the back is an inscription that reads “MY MIND’S MADE UP–DON”T CONFUSE ME WITH FACTS.” This quote is infamously attributed to the pro-Nixon Representative from Indiana, Earl Landgrene, who chose to support Richard Nixon amidst the Watergate scandal that lead to Nixon’s resignation and later Landgrene being voted out of office.

Recently, this profound statement on the back of my decorative desk item has been very indicative of experiences I have had with several people. I wonder if I came in possession of this item (I don’t remember where or how I even got it) as a prophetic warning that I would indeed face a number of people who hold dearly to this motto “MY MIND’S MADE UP–DON”T CONFUSE ME WITH FACTS.”

I feel sorry for those who make a conscious choice to avoid objective analysis of situations, people, politics, products, companies and more. These people choose to ignore facts and evidence, simply because they challenge their entrenched beliefs. The reality is these people who are unwilling to think for themselves are surrendering their free will to the situation, person, political party, product, or company they are clinging to. As “sheeple” these people not only lie to themselves, they are willing participants in their own manipulation.

Daniel Patrick Moynihan once said that “Everyone is entitled to his [or her] own opinion, but not his [or her] own facts.” People who want to have their own “facts” independent of truth fall victim to what is called a “confirmation bias.” Confirmation bias occurs when one thinks he knows something and tends to be blind and deaf to anything that disagrees with it. Even worse, people influenced by a confirmation bias selectively interpret information in a way that confirms one’s preconceived notions.

This error in thinking is not only damaging to a person, but could be life threatening. Imagine a pilot who has scheduled a romantic evening with her sweetheart flying over the sights of Delray Beach, Florida. She has carefully plotted the perfect route, anticipates seeing a variety of wildlife, and has looked forward to the trip for more than a month. The anticipated day arrives, but the weather forecast suggests a lightning storms is possible in the area around the time of her highly anticipated flight. If this pilot is afflicted with a deep confirmation bias, she would likely continue the trip — putting both her and her sweetheart in great danger — because she chooses to focus on the answer or facts she wants to believe, rather than reality.

A far better approach to life is to be flexible enough to objectively investigate information that contradicts what we hold to be true. Always be vigilantly aware of when confirmation bias may be influencing your decisions, particularly if you have a lot riding on the decision or information (i.e. a significant monetary investment). As you remain objective and flexible you will reduce the risk of manipulation and maintain your integrity and free will.